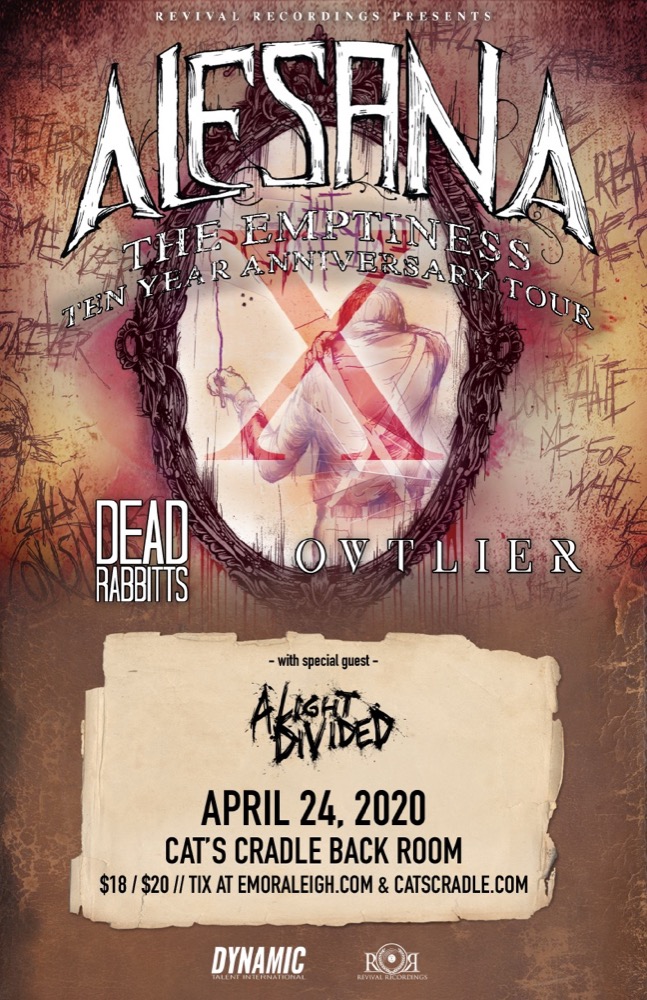 Positive Mental Attitude. This is the mantra that is not only a driving force for Raleigh, North Carolina based Alesana, but also a way of life. Celebrating eleven years as a band, the pop-metal sextet is always in high spirits and accustomed to playing their hearts out every night when on the road. Countless US tours, several trips around the world, and seven major releases later, Alesana is living proof that hard work and dedication to dreams can go a long, long way. Calling Revival Recordings their home, the band released the conclusion to their Annabel Trilogy in April 2015 with Confessions. Released in December of 2013, the stand-alone single Fatima Rusalka progressed the band’s conceptual trilogy en route to its conclusion with Confessions. The song does what has come to be expected of the storytelling rock machine which is to draw from past influences while incorporating new possibilities, dynamics, and sonic exploration. Having spent time on Tragic Hero Records, Fearless Records, and Epitaph Records, Alesana’s entire catalogue, consisting of Try This With Your Eyes Closed, On Frail Wings of Vanity and Wax, Where Myth Fades To Legend, The Emptiness, A Place Where The Sun Is Silent, and Confessions, has charted on the Billboard Top 200. In summer 2016, Alesana released a special edition of Confessions including two new tracks along with a novella, entitled Annabel, which inspired The Annabel Triology. The album is available on all digital outlets now and the novella is available for purchase on Amazon Kindle now.

In 2017, Alesana began working on the ulitmate fan project which they called Origins. Filled with hours worth of behind the scenes and never before seen footage, demos, and a brand new EP The Lost Chapters, Origins was born as a visual history of the past thirteen years of the band. In early 2018, Alesana released The Lost Chapters EP digitally. Origins bundles are currently available on the Revival Recordings shop page. The Lost Chapters EP is available to stream on all digital platforms and to purchase on iTunes now!