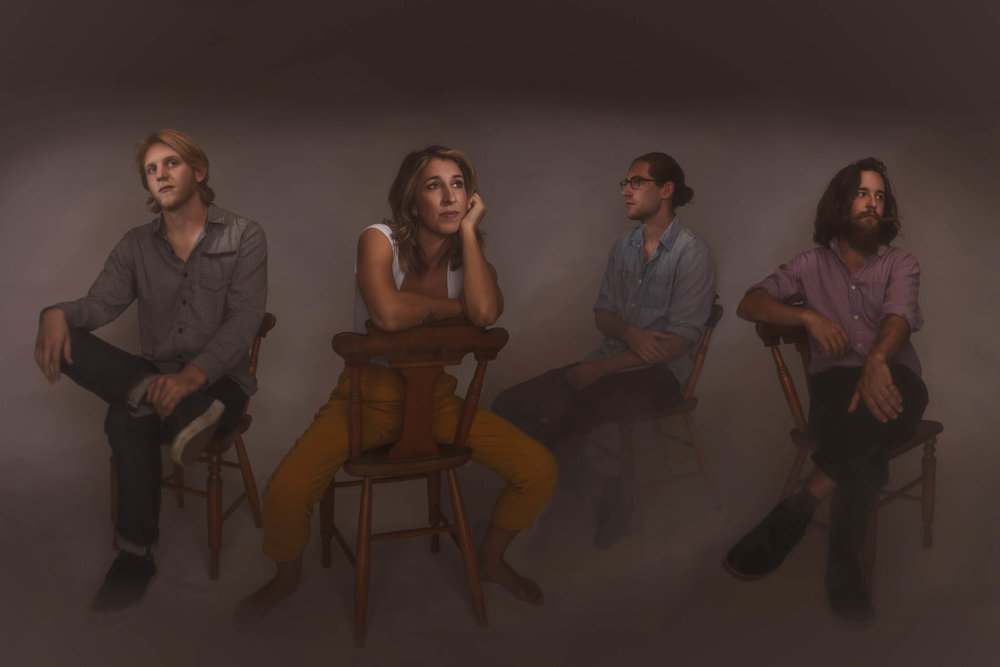 In their early days, Damn Tall Buildings didn’t rehearse – they busked. Now, whether live or on record, the band still radiates the energy of a ragtag crew of music students playing bluegrass on the street. But anchoring that energy is their instrumental chops, their strong songwriting, and their varied influences that stretch beyond bluegrass, even beyond American roots music altogether. Whether sharing lead vocals and instrumental solos or blending their voices into high-spirited harmony, Damn Tall Buildings are a tight unit that contains more than the sum of its parts.

Primary vocalist and lyricist Max Capistran’s singing recalls old blues and The Band-style roots-rock, whereas Sasha Dubyk’s time studying musical theater is evident in her rich vocal tone and soulful flair. The interplay between Avery Ballotta’s fiddle and Jordan Alleman’s banjo brings stratospheric dimension to the churning rhythm section of Capistran’s guitar and Dubyk’s bass. The band’s harmony singing is tight without being too slick – they sound like four individual voices joined together in celebration, not a perfectly polished machine. Their choruses are the kind you sing along to with a glass raised into the air. Their lyrics find beauty and glory in the mundane, workaday struggle of everyday life: time keeps passing, you don’t like your job, you drink too much, you laugh with your friends, you search for a home, and you dream about what else might be out there. You carry on. This is what Damn Tall Buildings sings about, what they seek to share with their audience.

This has long been the case, even when their audience was simply whoever happened to be passing by. In 2013, then students at Boston’s Berklee College of Music, the band took their instruments to nearby street corners and jammed for hours on old bluegrass and blues songs, traditional fiddle tunes, and eventually their own original music. They had become fast friends: Ballotta and Alleman met playing frisbee on Boston’s Revere Beach, while Capistran and Dubyk met in class, when they were wrongfully accused of cheating off each other on a test because they had put down the exact same incorrect answer. Busking, a continuous test of one’s ability to command an audience’s attention, cemented their closeness and fostered their infectious, captivating performance style. It’s how they learned half of their repertoire, and it’s where Dubyk first picked up the bass. Since then, they’ve made three albums: 2014’s Cure-All, 2015’s self-titled, and their forthcoming third album, Don’t Look Down. The band has also relocated to Brooklyn, NY and toured widely, sharing stages with Sierra Hull and the California Honeydrops and appearing at festivals like Grey Fox Bluegrass Festival, Philadelphia Folk Festival, and Freshgrass Festival, where they took second place in the 2016 band competition.