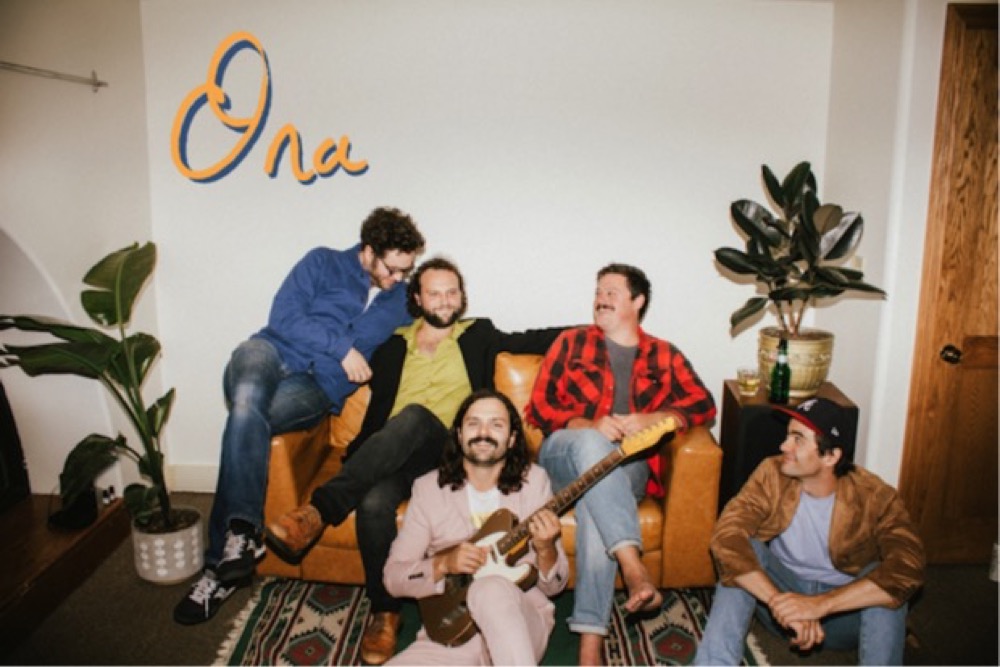 With a true brotherhood that comes from growing up together, indie rock band Ona merge all their musical history for their second album, Full Moon, Heavy Light.

The band shares its name with a small town just outside of their home base of Huntington, West Virginia. All five band members of Ona were raised in the area, with a couple of guys knowing each other since grade school. By tapping into their own social circles, the current line-up took hold in 2016: Brad Goodall (keys), Bradley Jenkins (vocals/guitar), Zach Johnston (bass), Max Nolte (drums), and Zack Owens (guitar). The band agreed on their name after Jenkins happened to wear an Ona Little League ball cap to rehearsal.

Recorded at various intervals over the course of 18 months, Full Moon, Heavy Light showcases a band that could easily deliver an arena show while still retaining the sincerity of the ’70s songwriters in their parents’ record collections. Wistful songs like “Summer Candy” and “Young Forever” are at once timeless and contemporary. The band says that they aimed to make a record that’s perfect for intensive listening on headphones as well as mood music for dinner parties with friends. The optimistic streak that runs throughout the project is both genuine and disarming.

“In the production, I wanted people to recognize emotion,” Jenkins says. “There’s a lot of ear candy that we snuck in there, but it might be an album that you need to sit with. We want our audience to experience and feel the music. There are ups and downs, and sometimes people might ignore those feelings, but we want people to recognize every emotion.”

“When I like a record, it’s because it makes me groove and it makes me smile, or it makes me contemplative,” says Johnston. “I just hope people will feel something when they hear it.”

Ona built their following the old-fashioned way – through word of mouth, lots of touring, and a little bit of luck. For two years, they played venues within a three-hour radius, cultivating fan bases in Cincinnati, Ohio, and Lexington, Kentucky, in addition to West Virginia. Opening slots for Tyler Childers connected them to audiences hungry for indie music from the region.

In addition, West Virginia Public Broadcasting helped place a song from Ona’s 2016 debut album, American Fiction, on a broadcast of NPR’s Heavy Rotation. Then a programmer at SiriusXM’s The Loft chanced upon their debut album while looking around Bandcamp and invited them to tape a segment in Washington D.C. After that, the esteemed PBS series Mountain Stage, which is filmed in Charleston, West Virginia, asked them to film an episode.

However, part of what makes Ona so unique is that their sound stands apart from the country and bluegrass heritage that the state is known for.

“I grew up in the woods, but my dad only listened to glam rock, so sometimes it’s hard for me to identify with the quintessential West Virginia image,” says Nolte. “I spent a lot of time, as a youth, kayaking and exploring West Virginia’s rivers, so I agree with everyone that it’s a beautiful state. But we don’t really exemplify it as a band, as far as what we ‘should’ sound like to outsiders, which I think confuses some people. We’re not stereotypical West Virginians and I think it’s important to shine a light on another aspect of the state as well.”

Goodall observes, “Living in a place like Huntington does alleviate some time and money pressures. We had this great rehearsal space with so much square footage, and we had the room and the time to develop our craft – to practice, to record demos on our own. We had all the time in the world to develop the music, which in the end is the most important thing.”