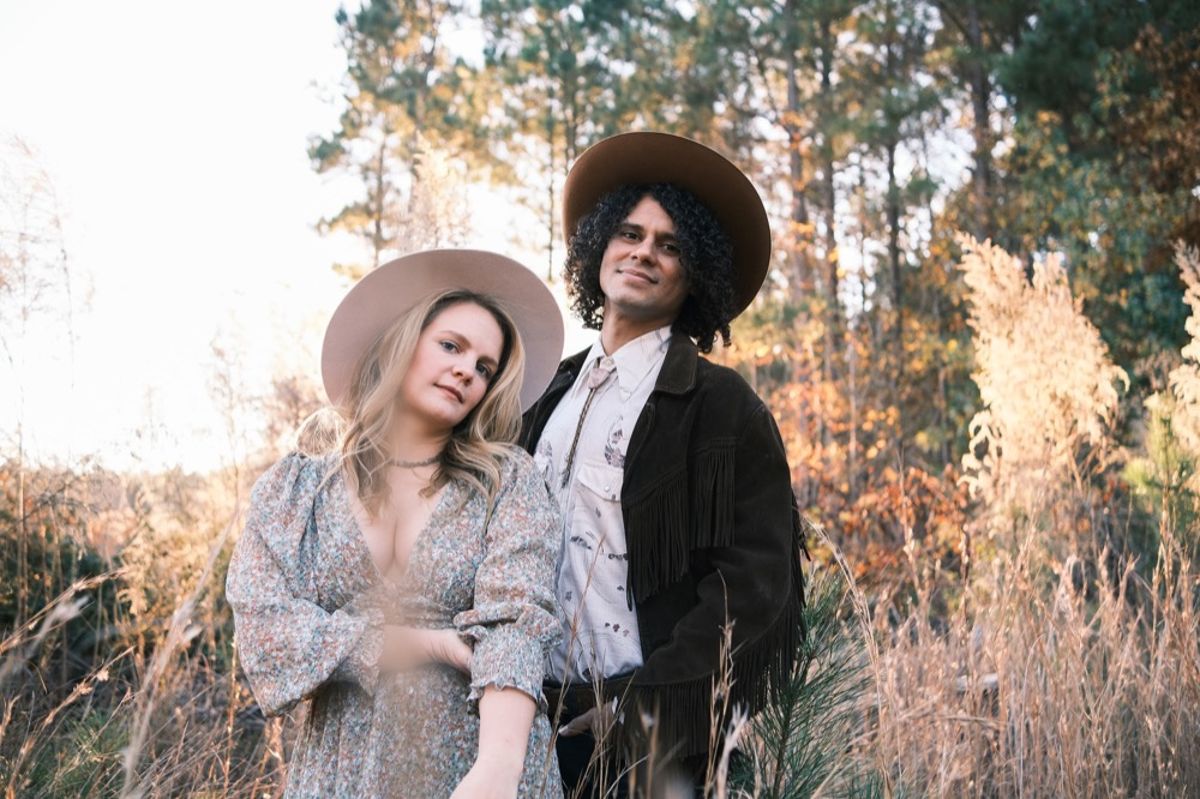 Hailing from the forests of North Carolina’s Eno River, Violet Bell brings forth the lush and sinuous sounds of Americana-Folk music. Lizzy Ross and Omar Ruiz-Lopez draw on a thread of untamable energy and natural magic passed down through generations of storytelling. As a duo with wildly different backgrounds, Violet Bell has a unique perspective on the roots music traditions that inform their sound. They’re tending to traditions and creating a new way forward for like-minded musical innovators, with their shared humanity at the forefront. With their forthcoming album, Shapeshifter, Violet Bell encapsulates the sound and mystery of Appalachia while unveiling how ancient folklore can connect to modern day life.

As a kid, Ross bounced from the Chesapeake Bay to New York City after her parents divorced. The city was magic for her young brain and her divergent families brought a wide array of musical influences – Neil Young, Patty Griffin, 90’s pop-rock – into her life (the latter of which resulted in a very short stint in a Green Day cover band – “yes, really” she says). Fifteen hundred miles away, Panama-born Ruiz-Lopez was growing up in Fajardo, Puerto Rico and soaking up the sounds of Caribbean folk, bachata, traditional salsa music, and the occasional American classic-rock. Nearly an ocean apart, both fell in love with playing music and all it afforded them – creativity, independence, an outlet for excessive energy. In their twenties, they both found themselves in North Carolina where their musical sensibilities were honed, appreciated, and expanded. Their introduction felt serendipitous; the two started playing music together and noticed almost instantly that the connection was real and important. Violet Bell emerged.

After a few years of touring, recording, and building a home together, the sound of Violet Bell has mellowed and settled into a rhythm that feels unapologetically their own. Shapeshifter initially began as a re-telling of an ancient Celtic myth. In the story, a fisherman steals the seal skin of a selkie, a mythical creature who is part seal, part woman. Imprisoned on land, the selkie lives with the man for years, even having a child with him, all the while slowly fading away and endlessly trying to find her way back home. While not every song is a direct reference, the selkie myth became a focal point for the duo’s creative process. They found modern questions in the ancient archetype –  how do we stay true to ourselves in a world defined by dominating and conformist systems? What does it mean to have – or not have – bodily autonomy? How do we close the gulf between who we are and who we pretend to be? Just as the selkie tries to conform and adjust to life on land, are we all just trying to fit our dreams, aspirations, shadows and wounds into tidy boxes so that we can survive? What would it take to recover our wild souls and a sense of being at home in ourselves?

Throughout the entire album, Violet Bell gently reveals their supreme talent of storytelling and prominent gift of transporting their listeners to places deep within each song, divulging intimate moments through the album that feels distinctive to each listener. Letting go of control and allowing the music to lead is what makes the music come to life, as Ross and Ruiz-Lopez breathe life into each song, one note, one tone and one word at a time.