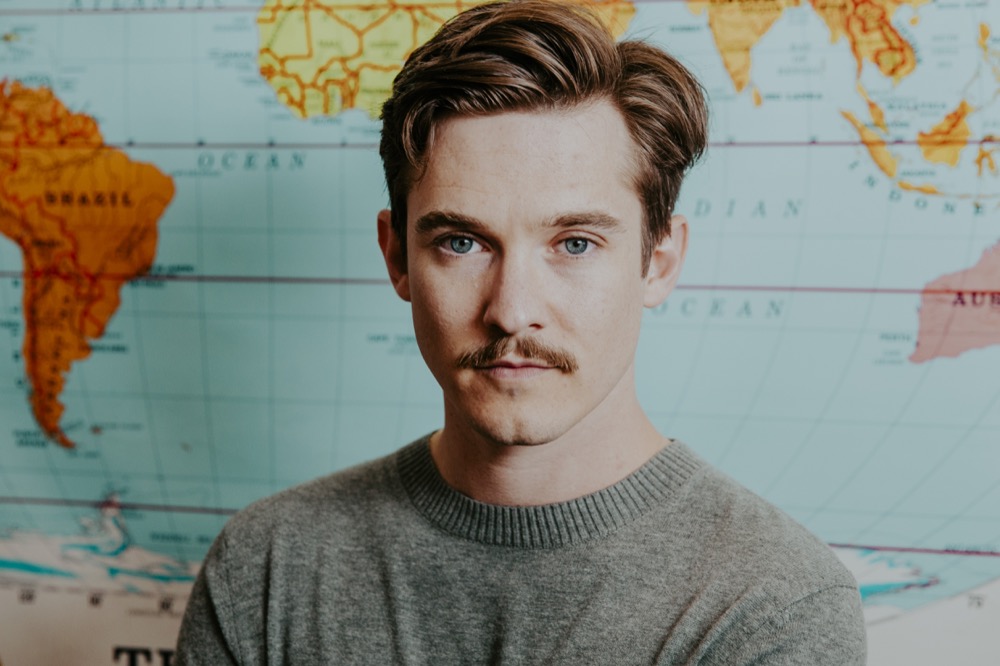 On his Polyvinyl debut ​Born Hot​, Chris Farren opens with a question he’ll spend much of the album trying to answer: ​Why do I feel out of place in my own outer space? ​Telegraphing his inner narrative with a childlike candor, the Florida-born artist lays bare his most intense anxieties and-in the very same breath-documents the mildly soul-crushing minutiae of everyday life: the strange indecency of blasting AC/DC bangers through an iPhone speaker, the inexplicable bleakness of a Starbucks franchise tucked inside a Target. But with his irrepressible sense of humor and utter lack of self-seriousness, Farren defuses the pain of even the deepest insecurity, gracefully paving the way for pure pop catharsis.

On ​Born Hot​ Farren fully embodies the sensitive-goofball dichotomy found in all his work, especially his exuberant live show: a solo performance in which he plays to live-recorded backing tracks while projecting purposely wacky visuals (his own face duplicated thousands of times, text that reads “ANOTHER PERFECT SET” at the end of each closing song). By the same token, Farren went full-on tongue-in-cheek in choosing ​Born Hot​’s title and cover art-a crudely drawn self-portrait that captures him lounging shirtless, looking every bit the ’70s-pop Lothario.

“In my lyrics there’s so much self-examination that teeters on self-loathing, and I like to juxtapose that with an aesthetic that’s completely the opposite,” says Farren. “It’s a defense mechanism, because I feel embarrassed talking about my feelings so very plainly, but at the same time I also just find the idea of having that much self-confidence really funny.”

In the making of ​Born Hot​, Farren recorded in his L.A. apartment and worked entirely on his own, embedding his inventive take on classic power-pop with flashes of folk and punk and ’50s doo-wop. On “Love Theme from ‘Born Hot,'” he slips into a sunny synth-pop reverie, bringing bouncy rhythms and radiant synth tones to a heart-on-sleeve message of romantic determination. “I wrote that when two different couples in my life were splitting up, and I felt kind of rattled but also so lucky to have my wife,” says Farren. Moodier and more darkly charged, “Search 4 Me” reveals his struggle to live in the present, articulating his anxiety in pieces of fragile poetry (e.g., “And you glared at me so loudly that I burst into confetti”). And on “Surrender,” ​Born Hot t​ urns exquisitely melancholy as Farren details the specific hurt of a sudden friendship breakup. “I was friends with their ex, and they told me it was too painful to stay friends with me,” Farren recalls. “‘Surrender’ is about that feeling of wanting to respect someone’s wishes, but also missing that person and just wishing you could talk to them again.”